As I’m involved in organising a hen party right now, I thought I’d share some of the stuff planned, considered and bought to help you with your own planning. We’ve also had our fair share of annoyances through out the process which I hope to alleviate for you if you ever plan yours.

So first things first deciding where to go. As we are based in Northern England, we had many options for big cities but been from a big city we wanted somewhere a little different to our usual haunts. Thankfully going abroad was not mentioned as I don’t think we could afford that even though it is an amazing option.

We settled on York, plenty of things to do through the day and night and also easy to get too. It is a little expensive in York but the city is gorgeous, full of cobbled streets and beautiful buildings. Before you book anywhere in York, double check to see if the horse racing in on as prices for hotels do go up.

We really struggled to get rooms at a decent price because of the races but we managed to find a hostel for £86 per person for 2 nights. The Aster Hostel is located on Holgate Road, not too far from the train station (about 20 minutes walk) and is fairly large. We booked a 6 bed room which contained bunk beds and storage cases as well as an ensuite.

The only thing that concerned me when booking a hostel was the storage situation. Although my case is a cabin size bag, it’s slightly bigger than most hand luggage cases. However, there was no need for my worries. Under each bed, were 2 cages that were big enough for hand luggage. My bag fit with plenty of room to spare. These could then be padlocked to the bed frame making then secure.

The rest of the hostel was pretty much like a hotel. They had a bar and lounge area downstairs as well as a dining room and kitchen. We had full use of the kitchen if we had wanted to cook and there was a fridge for guests (such a bonus). A simple breakfast was provided for a donation of £1 which is so good. Cereal, toast and hot drinks are enough for this price and I’m grateful for that. There was also a garden to the rear that was pleasant to sit in when getting over the hangovers.

Train fares between Leeds and York are pretty reasonable but we did have issues getting there for various reasons, mostly concerning the weather. However, the good old fashioned bus replacement service managed to get us there in one piece. Another option for getting to York was the Coast Liner service which offers even better prices than the train but does take longer.

Next things to sort were the props and festivities. No hen party is complete without the props and our group isn’t bothered about looking a bit daft. Naturally we had to get the bride-to-be a massive blow up penis. She loved it, we loved it, pretty much everyone loved it so we were on to a winner straight away. We also picked up some sashes and I was seriously impressed that we found a “gay best friend” sash as our bride is having her gay of honour not a maid. We also designed our own hen party t-shirts as this was so much cheaper than getting some printed within a shop. We picked up some cheap shirts from Primark and printed a design onto some transfer paper that again was a good price. All you need to do is iron on the transfer. Most of our props were picked up at the local fancy dress store, we even picked up a tiara and willy glow sticks.

For the festivities we wanted a range of things that didn’t just involve drinking. We settled on a couple of activities that were a little alternative but still have the cheesy hen party side of the things. For the Friday night, we decided to do a cocktail making masterclass as we all love cocktails and sounded really fun. Looking at the different places offering these classes prices ranged from £25-£45 per person depending on the location and the packages on offer.

We settled on All Bar One and it was £30/person as we got a welcome drink of Bellini’s and 3 cocktails to mix. There were several flavours to pick from with the Bellini and I chose, twas very lovely. Loved the masterclass, for me the only down side was that we coudn’t pick the cocktails we wanted to mix. Pretty much a set menu on that front. However, it was still such a fun experience that I’d highly recommend it. I just wish I could remember the names of the drinks we mixed but hey, that’s alcohol for you.

As our bride is into Viking LARPing, we thought that York Dungeons would be a perfect place to visit on the Saturday. Yea it was. Honestly if you love history, especially interactive history. Not the best place for young kids as it can be a little creepy (my friend ‘lost’ his ear in a botched beheading, and I got caged) but for everyone else it is pretty cool. The actors are amazing and their performances were perfect. No photography allowed inside but you can buy the group photos that are taken before you go into the dungeon. The groups prices are pretty good and if you all buy a different photo all of them are available to download which I think is awesome. The guys in the ticket office were amazing too. When they realised we were a hen party, they gave our bride a sash to wear as well. 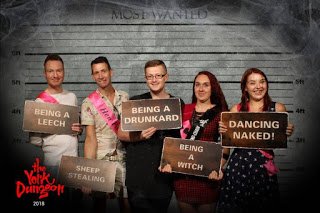 For the afternoon/evening we had a garden party as we thought this would make a cheaper weekend. It didn’t cause we spent the extra money on booze instead. However, this was such a chilled and brilliant afternoon. All we did was play silly games (hen party themed of course) and got steadily drunker eventually ending in a game of table tennis. All the party games involved penises obviously including pin the cock on the hunk, willy toss and cock-tail pong. I want to add here a massive thank you to the brides family for an excellent job in setting this up.

For the Sunday, we kind of decided that we’d had enough alcohol plus we were so hungover alcohol wasn’t the best option. Afternoon tea at the Double Tree by Hilton in York. There were 3 choices for the afternoon tea; vegetarian, traditional and luxury. The menu did tell you the four different sandwiches that came with each cake stand (oh yeah it was that posh) but you could change any of the sandwiches on the menus. I went with the vegetarian stand only because all the other sandwiches sounded like crap. There were also scones, jam, macaroons and fruit tarts on all of the stands. Definitely recommend going for afternoon tea after a hen weekend. It’s a great pick me up after all the alcohol imbibed but I wouldn’t necessarily recommend the Hilton.

All in all, it was a pretty good weekend fo activities. We spent many hours in Valhalla which is a small pub near the Shambles. Very viking but very nice. Discovered JJ Whitley Violet Gin and it is seriously good. Tastes exactly like parma violet sweets when mixed with tonic, like sherbet with lemonade. Give it a try, you won’t regret it, okay maybe you will.

Also, if you plan on going out drinking in York, don’t go out in shorts or trainers. You will be turned away from many places even when it’s 25 degrees outside for wearing shorts. We found a couple of places that were pretty cool but I really can’t remember the names of everywhere. I know we went to Popworld a couple of times and I was pretty shocked how much I liked it in there.

I’m not going to lie, we spent a lot of time just wandering around York, trying to find food, pubs and shops while looking at the sights. The Shambles is worth a visit especially if you love Harry Potter. There’s plenty of merchandise shops and the whole street reminds me of Diagon Alley. Other than that just wander and have fun.

Sorry this has been a lengthy post but I hope this has helped you with any planning tips or ideas for any kind of party I guess. Thanks for reading. I promise the next post will be up on the regular time of Sunday and will be a makeup review.

28 Self taught mua 🇬🇧 follow me on Twitter IG and FB: @rachnevsbeauty View all posts by RachNevsBlogs